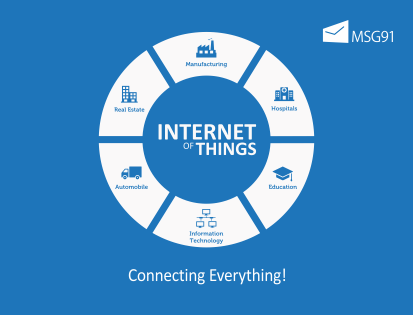 The possibility of devices taking decisions for human beings has gained popularity as well as pace with the growing era. In olden times, when Internet wasn’t as escalated as it is today, it was much harder for people to learn, discover and find out new trends to make life easier but times changed, and so did the use of Internet. It became the strongest network present in the current world. Internet of Things (IoT), as the name suggests, revolves around the concept- all the devices (things) should be connected to each-other and at the same time they should possess the capability to communicate without human intervention. It’s considered as the NEXT BIG THING.

IoT is taking the “THINGS” to a totally different level. Even the idea of instructing machines just with the power of speech seems so enthralling. Getting smart is all that matters. From humans to machines to homes to cities, anything and everything is getting automated and modish. Dreams are turning to reality with the growing scope of IoT parallely with technology.

The field of IoT has blown the world by turning imagination into reality in the past few years. Automation is the new demand in the current markets and IoT is the biggest tool for contributing towards it. What if we could smartly adjust the temperature of our surroundings by commanding the AC or heater directly without even touching the remote control or if a person gets stuck in a lift, isn’t it better if the lift-man or authority automatically receive an SMS informing about such situation and eventually come to the rescue as soon as possible.

Growth of IoT in different sectors has been depicted as it is being used in various fields. Critical alerts can be sent in real time. For instance, if a situation of fire takes place in a building, using IoT, an automated alert can be sent to higher authority and preventive measures can be taken for it accordingly. Gadgets like mobile phones play a vital role in utilising the capabilities of IoT as the number of cell phone users has exceedingly increased in the last decade. A simple SMS can prove to be the most efficient manner of communicating a message to the masses. In the field of automobile, one can calculate average, consumption of fuel and accordingly find out the best possible conditions for a vehicle to last long. Also, road assistance facilities can be facilitated with the growing scope of IoT. If an accident happens, an alert can be sent  the manufacturer who in turn will send it to the dealer who can directly send the GPS location to the operator itself avoiding the time delay in taking proper measures.

Many other fields are being analyzed to explore the scope of IoT further because in the end only the best things can survive. After going over the current and past of Internet of things, it won’t be a surprise to consider the future to be more advanced, developed and extraordinary.

How a developer’s curiosity led to a stellar product called SendOTP!

MSG91 initiates dialogue on IoT in an enriching conclave